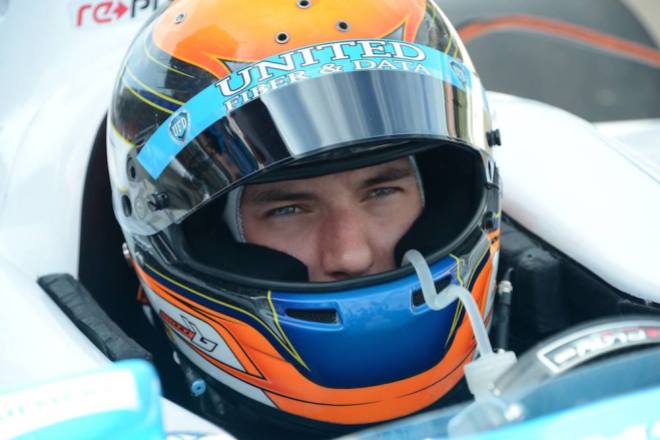 Matt Brabham will make a return to Indy Lights for the first event of the 2015 season at St. Petersburg, Florida (March 27-29) with Andretti Autosport.

The arrangement sees the Brabham and Andretti names come together once again after a successful first Indy Lights season in 2014 and clinching the Pro Mazda Championship together in 2013.

Matt was in Indianapolis today for a seat fitting and will test at Homestead-Miami Speedway on Monday prior to the Florida race.

Brabham has had a great deal of success at St. Petersburg in the past. He dominated both races in the Pro Mazda Championship in 2013 to start his record-breaking championship year – which saw him take 13 wins, including seven in succession. In the 21-year-old’s first Indy Lights race there last year, he qualified third and was pushing for second before a brush with the wall dropped him to ninth.

2014 saw Matt, the grandson of three times Formula 1 World Champion, Sir Jack Brabham, finish fourth in the Indy Lights title hunt. Matt’s debut season in the category included a win at the Grand Prix of Indianapolis and a heart-breaking Freedom 100 at the Indianapolis Motor Speedway, where he finished second by a mere 0.005 of a second.

During the US Winter, Brabham has been occupying Reserve Driver duties for the Andretti Formula-E team, being drafted in for the Putrajaya and Punta del Este rounds of the all-electric series, acquitting himself well during both campaigns with limited leadup time.

His chief engineer from the Formula E campaign, Dave Seyffert, will be engineering the No. 83 car at St. Petersburg.

Joining Brabham in the Andretti Indy Lights squad will be another Mazda Road to Indy standout – Shelby Blackstock – who was his teammate in 2013 and the duo work well together on setup and data sharing.

In total, the Indy Lights presented by Cooper Tires Championship consists of 16 rounds at 10 events in support of the Verizon IndyCar Series. St. Petersburg will be the first event of the new generation Dallara Indy Lights chassis package, which has brought increased interest from around the globe.

“It’s brilliant that we have the opportunity to link up with Andretti Autosport again for this campaign,” said Brabham. “It has been a tough off-season trying to piece everything together, but thanks to the team and some close supporters, we’ll be at St. Petersburg.

“Having won both races at St. Pete in Pro Mazda and being quite strong there last year, I’m confident of hitting the ground running. It’s a great track and I love street courses, so we’ll be aiming to be in the mix.

“It is a brand new car this year – so there is a bit to learn, but the experience from developing the Formula E car with Andretti will work in my favour – like the Indy Lights car, it was a totally new package and those FE street courses are some of the tightest I’ve ever raced on.

“In terms of Indy Lights testing, I’m a bit behind the eight ball, but through FE and training regularly, I’m going in race fit. Andretti Autosport are the best team in the pitlane, so I have no doubt the knowledge they’ve obtained from Shelby (Blackstock – teammate) will help me, plus I now have a great working relationship with Dave (Seyffert – Engineer) from our Formula E adventures.

“Without the support of Michael and the team at Andretti Autosport, we wouldn’t have this opportunity so I am very thankful to them, also my family and a group of supporters – who we’ll be working hard to repay with a very strong result.”

“It’s great to have Matt back in a seat within our Indy Lights program. He’s done a stellar job stepping up for us in the INDYCAR off-season in our Formula E team as reserve driver, but it will be great to see him back in Indy Lights alongside Shelby (Blackstock). Those two work well together and they will be ones to watch as they hit the streets of St. Pete.”

Penske Entertainment to Take Over Indy Lights Operations Next Season

TORRES: Any Help Is Key During Hiatus for Indy Lights