Days removed from the controversial racial remarks made by former Chip Ganassi Racing driver Kyle Larson, fellow competitor Bubba Wallace released a statement Thursday regarding how he felt about the recently suspended driver.

Wallace stated that Larson reached out to him minutes following the incident which occurred Sunday night at an iRacing event called the “Monza Madness,” but face-to-face video conversation wouldn’t take place until Monday morning.

Although Wallace felt what Larson said was unacceptable, he did believe his apology during their FaceTime discussion was sincere due to his emotions and pride being shattered as seen from Larson’s apology video.

More so after he lost all of main sponsors (Credit One Bank, McDonald’s and Clover), his personal ties with Chevrolet, his Cup ride and suspended indefinitely by both NASCAR and iRacing in a span of nearly two days.

“What Larson said was wrong, whether in private or public. There is no grey area,” said Wallace. “I saw the incident the night it happened and within five minutes Kyle texted me. He called me the next morning as well. Finally, I called him back with a FaceTime to talk “face to face,” and we had a good conversation, his apology was sincere.”

The Richard Motorsports driver, who faced controversy after rage quitting two weeks ago from the eNASCAR iRacing Pro Invitational Series race at Bristol that led primary sponsor Blue-Emu dropping him, added that Larson must eliminate racial slurs out of his vocabulary. Not only that, he’ll be willing to work with Larson on becoming a more inclusive person.

“It was too easy for him to use the word and that he has to do better and get it out of his vocabulary. There is no place for that word in this world,” said Wallace. “I am not mad at him, and I believe that he, along with most people deserve second chances, and deserve space to improve.

“I do wish him and his family nothing but the best. And I am more than willing to work with him to address diversity and inclusion in our sport.”

At this time, Larson is required to not only attend sensitivity training on the NASCAR side, but also the World of Outlaws, which he’s both a driver and owner, as he can return to the latter if he completes it within 30 days following the incident.

Larson’s incident was far from the subject Wallace discussed in his statement. He was also baffled with the comments he’s received on his social media feeds. What he hopes is that the NASCAR community and society as a whole to be better so they can eliminate the sport’s bad stigma of being in his own words, a “racist and redneck sport.”

“As an athlete, we immediately become representative of something bigger than ourselves. This is something most people may not understand,” said Wallace. “We are ambassadors for our partners, our race teams, crews, families and the sanctioning body. Every person is affected.”

Admitting that he hasn’t been the best ambassador, Wallace wrapped up his statement by saying that he’s proud of being a member of the sport. He also fully supports what the rule book states that a member shouldn’t make or cause a statement that disparages other people because of their backgrounds such as color, origins, sexual orientation and religion.

“I AM A NASCAR MEMBER. A damn proud one too,” said Wallace. “I would expect and should be held to the same standard as any other members of the sport.

“I think everyone can learn something from what has happened these past few weeks. I am looking forward to getting the season back underway and continue our momentum.” 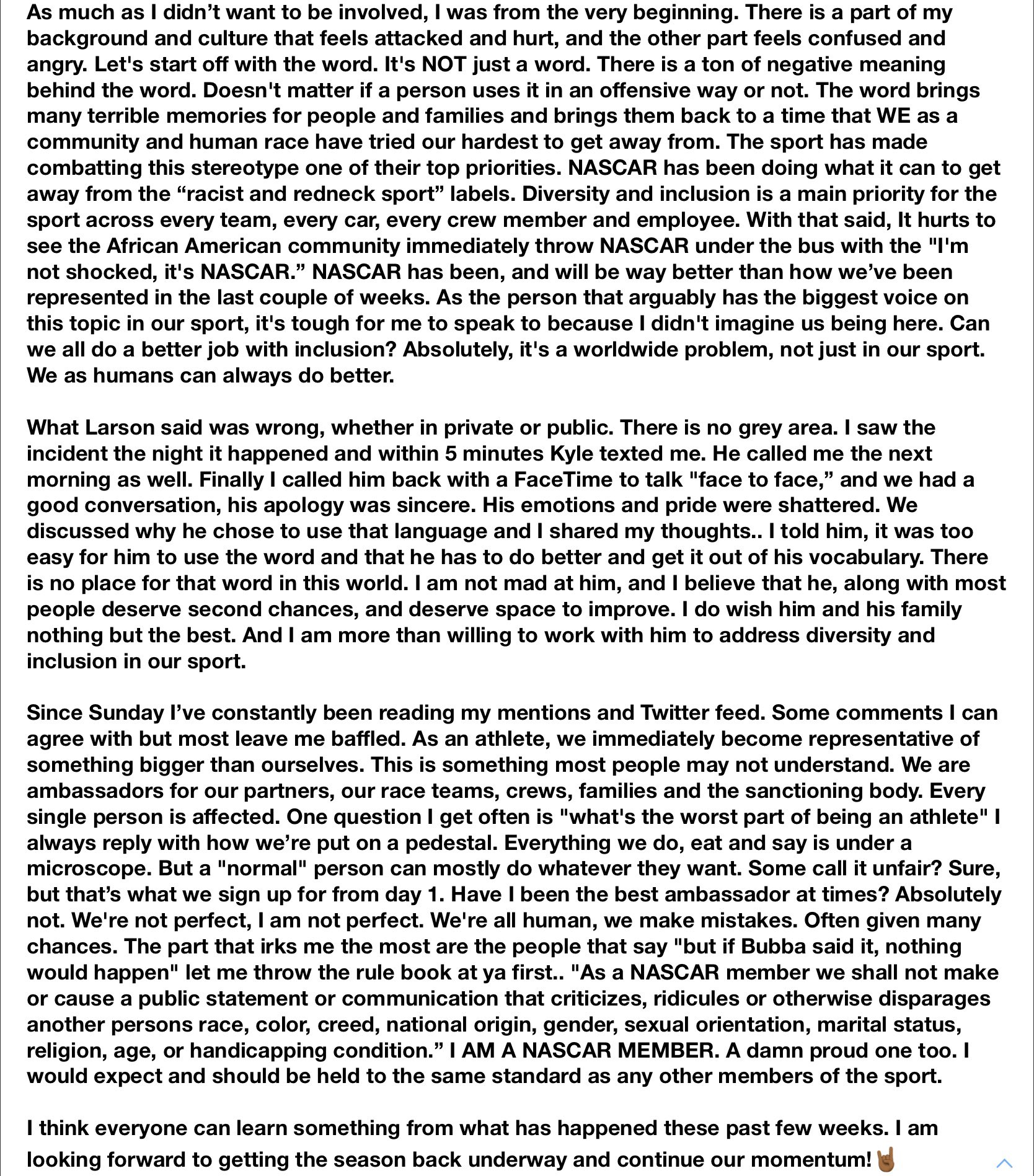 From the Pacific Northwest, Luis is a University of Idaho graduate with a Bachelor's degree in Broadcasting and Digital Media. Ever since watching the 2003 Daytona 500, being involved in auto racing is all he's ever dreamed of doing. Over the years, Luis has focused on writing, video and photography ranging from Idaho athletics to auto racing with ambitions of having his work recognized.

Sonoma Announce the Return of ‘The Chute’ for 2022 NASCAR Weekend