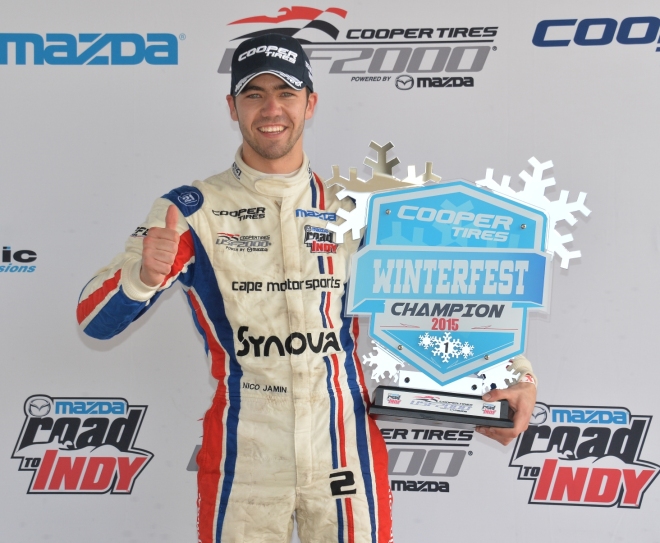 A dramatic pair of races today in bitterly cold conditions at Barber Motorsports Park saw young Frenchman Nico Jamin of Cape Motorsports with Wayne Taylor Racing edge Brazilian Victor Franzoni to the fifth annual Cooper Tires Winterfest title. American Jake Eidson also was in the thick of the action until his Pabst Racing entry was cruelly hobbled by a fuel pump failure while holding second place in the early stages of the final race.
The pre-season series was cut short by one race following the cancellation of yesterday’s track activities due to heavy rain, but today’s drama more than made up for that disappointment.
Eidson, 19, from Littleton, Colo., was in the catbird seat after finishing a close second to Franzoni this morning. He also posted the fastest race lap, ensuring him of pole position and an additional two championship points entering this afternoon’s mini-series finale. Allied to his pair of wins last week at NOLA Motorsports Park, Eidson needed only a seventh-place finish to secure the series crown.
A brilliant move around the outside of Turn One gave Franzoni the lead for Afterburner Autosport. Eidson tucked in behind, only for his car to grind to a halt before the end of the opening lap. His car was brought back to the pits but there was no easy fix. His title hopes had been dashed.
After another full-course caution when MAZDASPEED Scholarship winner Luke Gabin (Team Pelfrey) hit the wall at the exit of Turn 17, Franzoni held onto his lead at the restart but he couldn’t shake off Jamin. Then, with just three laps remaining, a mistake by Franzoni at the final corner gave Jamin the opportunity to nip past – and secure the Cooper Tires Winterfest crown by a scant five-point margin, 136-131.
Aside from his suspension breakage at NOLA while battling for the lead with Eidson, Jamin was a model of consistency with a trio of podium finishes, including a third-place result this morning, heading into the finale.
Australian rookie Anthony Martin capped a successful initial foray to North America by finishing fourth this morning for John Cummiskey Racing and adding another podium this afternoon to the third-place finish he secured at NOLA. The results catapulted him to fourth in the overall standings, just two points ahead of Jamin’s Cape Motorsports with Wayne Taylor Racing teammate Aaron Telitz, who crashed at the first corner this morning, then charged through the pack this afternoon to fourth after starting 14th. Telitz also set the fastest race lap.
Cape Motorsports with Wayne Taylor Racing comfortably won the Team Championship with 158 points to the 116 of John Cummiskey Racing.
The next time the USF2000 cars will see action is for the opening two rounds of the regular season Cooper Tires USF2000 Championship Powered by Mazda on the streets of St. Petersburg, Fla., on March 28/29.
Nico Jamin (Cape Motorsports with Wayne Taylor Racing): “Everyone at Cape Motorsports worked so hard all week, and I’m so happy to get the last win of Winterfest and the championship. I didn’t trust it when the team told me! I’m super-stoked for the beginning of the championship. This gives me a lot of confidence going into the season. I can’t wait for St. Petersburg, but this is very high competition, with the second-year guys who are really fast and the rookies that are coming closer, race after race. It’s going to be a very exciting championship!”

Road to Indy Distributes Over $1M in End of Season Awards