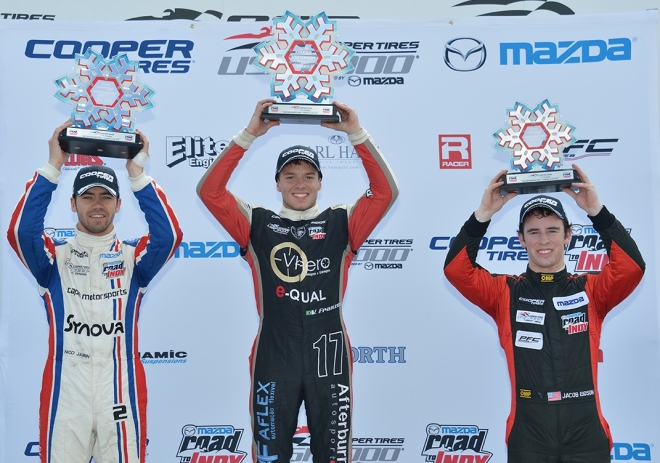 Jake Eidson and Victor Franzoni shared the victory spoils for Pabst Racing and Afterburner Autosport respectively following today’s pair of 30-minute Cooper Tires Winterfest races at NOLA Motorsports Park. Eidson, who also won yesterday’s opening round of the six-race pre-season mini-series, now holds a commanding 26-point advantage over his nearest pursuer as the first rung on the Mazda Road to Indy ladder heads to Barber Motorsports Park for three more races next week.
After an electrical problem in qualifying restricted Franzoni to an unrepresentative 14th on the grid for Round One on Thursday afternoon, he charged through the pack to finish sixth. Today he was even more impressive, storming from seventh on the grid to third at the end of Lap One this morning, then making quick work of both Eidson and polesitter Nico Jamin (Cape Motorsports with Wayne Taylor Racing) to take the lead on Lap Three. He never looked back en route to a clear victory.
Jamin finished almost three seconds in arrears after Franzoni eased his pace on the final lap, while Eidson was a similar margin farther back in third, well clear of yesterday’s second-place finisher, Aaron Telitz, in a second Cape Motorsports entry. Australian Jordan Lloyd once again was the first rookie finisher coming home in fourth for John Cummiskey Racing.
Franzoni, who also won at NOLA in the 2014 Winterfest, lined up third on the grid for this afternoon’s third round, and once again lost no time in making his move for the front. Indeed he was already more than one second to the good by the completion of the first 2.75-mile lap. He drove away imperiously and was well clear of everyone else when the pace was slowed by a full-course caution after Jamin pulled off the track with a broken suspension. The failure was caused by a clash of wheels under braking for Turn 12 as Eidson wrested away second place with a bold outside-line pass.
The race finished under caution, but Franzoni’s joy was short-lived as his car failed post-race technical inspection and he was disqualified from Race Three, handing the victory to Eidson.
Lloyd and countryman Anthony Martin capped an impressive race meeting for John Cummiskey’s team by taking second and third in the revised results, followed by Garth Rickards, who drove a strong race to be first among Team Pelfrey’s four-car contingent.
Jake Eidson (#22 Pabst Racing): “I’m happy with the results from this week. The Pabst team worked really hard to make sure the car was as good as it could be, so my hat’s off to them. Between qualifying and Race One, I had a clutch issue. They were able to take the car from one piece to two pieces, put in a new clutch and put it back together in less than 35 minutes. Not many people know how hard they worked to make sure the car was back and running for race one! We had some good races, especially the third race today – I spent most of the race trying to get around Nico (Jamin) and got him with just a few minutes left in the race. I’m not sure exactly what happened, we were racing wheel to wheel and I was in front of him. But that’s racing. I was very happy to be consistently running up front and I hope we can keep it going at Barber.”

Road to Indy Distributes Over $1M in End of Season Awards

MORGAN: Phoenix Marks the Passing of the Torch Between Johnson and Elliott