Whelen teams with Action Express in 2015 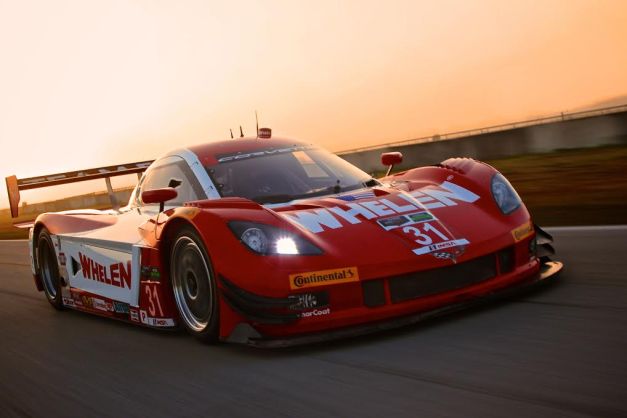 The Denver, N.C.-based organization will field the No. 31 Whelen Corvette Daytona Prototype for Whelen Engineering. The Coyote-chassied machine powered by ECR Engines will run alongside the 2014 TUDOR Championship-winning No. 5 Corvette DP of Joao Barbosa and Christian Fittipaldi.

The No. 31 Whelen Corvette DP will feature an all American driver line-up with drivers Eric Curran and Dane Cameron joining forces. Curran campaigned the 2014 TUDOR Championship for Whelen while racing under the Marsh Racing banner.

Cameron has Prototype experience that stretches back to 2007, including a full season at the Prototype level in 2013 that saw him score multiple pole positions and run at the front in many races. He has also proven to be a quick study in GT competition, as he claimed the 2014 IMSA TUDOR GTD Driver Championship title.

The Curran and Cameron pairing is a deeply talented and experienced one, as Curran first joined the IMSA ranks in 2000 and has four Rolex Series race victories to his credit, including two behind the wheel of a Whelen Engineering Corvette (Road America 2011, Lime Rock Park 2013) and 15 Continental Tire SportsCar Challenge victories. He has made over 70 IMSA starts between his time in the GRAND-AM Rolex Series, the Continental Tire SportsCar Challenge Series, and American Le Mans Series.

“I’m extremely excited to be moving into my second year in a Daytona Prototype in 2015,” said Curran. “This will be my ninth year with Whelen Engineering and working with Sonny Whelen. I’m especially excited to be moving our whole Whelen Motorsports program over with Action Express who just won the IMSA TUDOR prototype championship in 2014. Whelen Engineering is a great American-based company so to be joining together with a successful American team with two American drivers is just great.”

26-year-old Cameron not only enters the 2014 season as the reigning GTD Champion, his championship ways date all the way back to 2005 when he won the Jim Russell Championship Series in California. He went on to win the Palmer Audi Winter Championship in Europe in 2006 and then won the 2007 Star Mazda Championship here in the United States. Cameron was just the second first-year Champion in the 18-year history of Star Mazda.

“It’s a tremendous opportunity to step back into the premiere category in the TUDOR Championship and to do so with the reigning prototype champion,” said Cameron, who moved to North Carolina last year and has spent time visiting the Action Express Racing shop. “Partnering with Whelen and Eric (Curran) is a great match all around.”

The No. 31 Corvette DP team will operate out of Action Express Racing’s Denver, N.C. race shop.

“This is an exciting opportunity for Whelen to align with an organization like Action Express,” said Sonny Whelen. “Their record speaks for itself, and I think that Dane (Cameron) is an exciting American talent who will be a great match for Eric (Curran), who we’ve known for such a long time and has been a great driver for us. Hopefully we can not only enjoy some success on the track, but also continue to raise awareness about the Michael J. Fox Foundation for Parkinson’s Research by campaigning our Team Fox Corvette DP with our partners at Action Express.”

“This is a tremendous addition to the team, and I think it reflects the incredible hard work and preparation that everyone on this crew has delivered since we first came together in 2010, as well as the leadership that Elton and Gary provide for this team,” said Action Express Racing Team Owner Bob Johnson. “We have known Sonny (Whelen) for a long time and it is great to have that relationship develop into a partnership like this. Dane (Cameron) and Eric (Curran) are both highly sought after for what they can do, and I’m excited about having them become part of the Action Express Racing family.”

“Joao (Barbosa) and the Action Express team invited me and Eric to come share a two day test at VIR this week,” said Cameron. “This team just hasn’t stopped working as the whole organization looks to build a one team, two car program. We are all getting along well. It’s not very often you get to go testing with the team and driver that just won the championship. It was an incredible opportunity.”

“The test was great, I don’t think in all of my years of racing, I’ve ever done a test within two weeks of finishing a season,” added Curran. “It’s really important to just understand personalities and meet people so it was great for Dane (Cameron) and I to come in and meet all the guys on the team and get some communication going on the car. It was hugely beneficial to do the two day test. We learned a lot about how the car works – even just the simple things like where the switches are and what it’s like to communicate with the team. It was very beneficial and a big jump start on 2015 so we’re all really excited.”

The 2015 IMSA TUDOR United SportsCar Championship season opens with official testing at the Roar Before the 24 on January 9-11. The Rolex 24 at Daytona kicks off the 2015 TUDOR Championship race season on January 24.

Bell Muscles to Third at COTA After Power Steering Issues

Harvick on Vegas Performance: ‘We Just Missed It Bad’