Jupiter, Fla. – If the drivers’ comments following the first test of the new Mazda MZR-R-powered Dallara IL-15 are anything to go by, this year’s Indy Lights Presented by Cooper Tires season is likely to be a barn-burner. A total of eight drivers representing five teams took part in the two-day test at the 2.034-mile Palm Beach International Raceway in Jupiter, Fla., and all were ecstatic about the pace, consistency and reliability of the new car which will make its race debut on the streets of St. Petersburg on March 28/29.

At the conclusion of the first day the top four drivers and teams were separated by a hair over two tenths of a second. The top two drivers from last year’s Pro Mazda Championship Presented by Cooper Tires were the initial pacesetters, with second-place finisher Scott Hargrove, from Vancouver, B.C., Canada, driving for Enzo Potolicchio’s impressive 8Star Motorsports team, edging out series champion Spencer Pigot (Juncos Racing) by a scant 0.0643s. Hargrove’s best time on the opening day after completing 46 trouble-free laps was 1:06.8606.

Felix Serralles, from Ponce, Puerto Rico, making his return to the U.S. scene after competing in the FIA European Formula 3 Championship the past few years, also was right in the mix for the 2014 Indy Lights championship-winning team, Belardi Auto Racing, at 1:06.9886, followed by RC Enerson, from New Port Richey, Fla., who has joined Schmidt Peterson Motorsports after finishing second in last year’s Cooper Tires USF2000 Championship Powered by Mazda, at 1:07.0624. 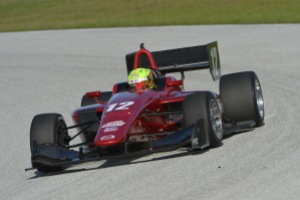 The teams had much to do sorting out the attractive new Dallara IL-15 chassis, the turbocharged 2.0-liter Mazda MZR-R engine and the latest specification Cooper tires. Only 8Star Motorsports and Schmidt Peterson Motorsports had any prior experience with the car – at an entrant test day at Palm Beach last month – so progress was rapid and consistent.

Under cloudy skies today, the teams completed a combined total of 563 laps (on top of the 494 yesterday), and although ultimate lap times were not the goal for most of the teams, rookie Kyle Kaiser, from Santa Clara, Calif., claimed bragging rights by posting the fastest lap of the test late this afternoon at 1:05.2689 for Juncos Racing.

Hargrove ended the day second quickest at 1:05.5041, followed by Spencer Pigot (1:05.6357) and Englishman Jack Harvey (1:05.9281), who finished tied on points with last year’s champion Gabby Chaves, losing out only on a tie-breaker, and these past two days was focused almost exclusively on development testing for Schmidt Peterson Motorsports.

Shelby Blackstock, #51 Andretti Autosport: “This is the first time I have driven the car. It’s an amazing car. I like it a lot. You definitely have to get used to how the turbo works. It’s a proper race car. It is exactly everything they said it would be. It has some tweaks we need to figure out but that is why we have all of this testing.”

On the progression from USF2000 to Pro Mazda and Indy Lights: “It’s really the perfect stepping stone. You have USF2000, which is pretty much a bare junior formula car which teaches you all the right stuff and then you move to Pro Mazda which has a little bit more technology, a little more downforce. You have a good base so when you come here, to Indy Lights, it’s the perfect balance. It has the proper amount of downforce. It has enough technology on it to where when you go to IndyCar, you are used to a lot of stuff; a very integrated dash and the steering wheel. It’s the perfect step for the Mazda Road to Indy.”

RC Enerson, #7 Schmidt Peterson Motorsports: “I think the car is a huge step up from the older car. It looks a lot cooler and definitely handles a lot better. It is one of the coolest cars that I have seen and driven. Going from the 2014 tires to the 2015 tires was a humongous change. It gains a lot of grip and definitely made the car more stable. I think Cooper did a good job with the new tires.

“The brakes are good. I have been playing with the bias a lot. The bias definitely helps with the handling. With this car, you change the bias and it really changes the handling of the car and you can use that as a big tool now.”

Scott Hargrove, #8 8Star Motorsports: “The car is fantastic. Yesterday was our second day running the car and not a single issue. We are making laps and working on the setup and I have been working really well with 8Star and it shows on the results sheet so we will just keep working away.

“It seems like every time I go on the brakes, I go a bit later and it’s kind of getting serious at this point. The PFC brakes are just so good. If you lock up a little bit, you are just really pedaling it and instantly the wheels start spinning again so it is super controllable. The 2015 tires are really, really good. I am looking forward to the year on Coopers. The tires are more consistent, they last longer in a run and the construction of the tire suits this car better so hats off to those guys for making the right tire for the right car.”

Jack Harvey, #77 Schmidt Peterson Motorsports: “My first impression of the car was a pretty good one. I think Dallara did a nice job of developing what I think was already a good car in the old Indy Lights. The new car in every way is a big step forward. Everyone involved on the engine side as well, everyone has done a nice job in putting a competitive car on the track. I think the series should be really proud of what they have achieved. We still have some bugs to work out just from the team’s perspective on how to get optimal, maximum performance. With a new car, there is just lots to learn to get that peak performance.

“Cooper did a great job in developing the tires. The tire from last year was a little unique and a little tricky at times to get our head around but they have taken that and made a better tire on top of it. So, the tires, the new engine, the new car is like the perfect combination to just move forward and everyone involved did a great job.”

Kyle Kaiser, #18 Juncos Racing: “The car is super-fast. I really enjoy driving it. I started off just getting acclimated and finding the limits of the car. The faster and faster I go, I find the more I can push the car. I just really enjoy driving it. Everything is faster. You have more brakes, more grip, more downforce – everything is just improved.

“The tires have been handling great. On the new tires, we have been finding almost over a second. They have a lot more grip and are pretty consistent.”

Spencer Pigot, #12 Juncos Racing: “I love the car. It’s great. It’s fast. The Mazda engine is producing a lot of horsepower which is fun. We had no issues on the car whatsoever. It ran flawlessly and we did quite a few laps. I am looking forward to continuing to develop it and trying new things.

“This is the most advanced car I’ve driven. All sorts of buttons on the steering wheel and the dash are very nice and confusing – all sorts of things that I have never had to deal with before. It’s exciting for me to get to work with a brand-new car. Usually, I go into a team and they have all the set-ups and everything. It is a neat experience to be able to be the one that helps to develop the car and steers the team in the direction we are going to be headed.”

Ethan Ringel, #71 Schmidt Peterson Motorsports: “Right now I love it. It is probably my favorite car that I have driven. It feels very similar to the Atlantic car and that was my all-time favorite. I just love the grip and the feeling that the car is on rails with the downforce. This car really steals that kind of stuff from the Atlantic car and it feels excellent at speed. Today I was able to get the car working toward my liking after a tough Day One but I collected myself and put some lap times down and I am just having a blast. I love it so much.

“I drove on the 2014 tires yesterday and the 2015 tires today and instantly you could see the amount you can really attack them off the first lap. Immediately they grip in and hold on for a good amount of laps and really have a long life.

Felix Serralles, #4 Belardi Auto Racing: “So far we are going in the right direction and I’m quite happy. The car looks great. I have to be a lot softer in my steering input because I am used to a lot heavier car. Power-wise it is great. It’s fast. It’s pretty amazing and it is really fast. The stopping power is quite good.

“I was running on the old compound tires pretty much the whole day yesterday. This new compound definitely has more grip. I have been able to do 20 laps this morning and stay within a tenth on each lap.”

TORRES: Any Help Is Key During Hiatus for Indy Lights

TORRES: Instant Reaction on the Food City 300 at Bristol

TORRES: Takeaways from the UNOH 200 at Bristol